Polar Express ridership increased to 29,552 in 2019 up 11% from 26,631 in 2018. In addition to Polar Express, the CMRR ran a variety of theme trains in 2019, including the Easter Bunny Express, Steam Engine Viscose No. 6, the Great Train Robbery, Music Trains, Ice Cream Trains, Leaf Trains, and Pumpkin Trains, and the Catskill Mountain Flyer. The CMRR renovated another 1.7 miles of County-owned track in 2019, lengthening its ride to nearly five miles to Stony Hollow in the Town of Kingston.

Of the CMRR’s riders, at least 31,817 or 77% came from outside Ulster County. Zip Code analysis provided the following percentages: 21% NYC and Long Island, 11% Orange County, 12% Westchester and Putnam Counties, 10% Dutchess County, 6% Rockland and Sullivan Counties, 7% percent from other NY State Counties, and 10% from out of state.  The CMRR delivered significant numbers of riders directly to the doors of Kingston area restaurants and shops last year.

Additionally, the CMRR purchased nearly $500,000 in goods from over 50 different Ulster County businesses and paid $50,000 in rent to Ulster County in 2019. Its annual payroll increased to over $379,000, employing a full-time Event Coordinator, 2 full time and over 30 part-time employees, over 50 local seasonal employees, including 40 high school students, and paying over $29,000 in payroll taxes. The CMRR invested over $250,000 in Ulster County-owned railroad track in 2019. Almost all the CMRR’s operating expenditures were spent in Ulster County or the surrounding area except for licensing fees, ticketing and merchant fees, and insurance premiums. The CMRR spent $74,000 on insurance in 2019, and has the highest insurance liability coverage required of any County vendor. As in prior years, all CMRR revenues are reinvested back into the railroad.

In 2020, once its permit is extended by Ulster County, the CMRR plans to expand its operations in Ulster County, continuing to renovate track west of Stony Hollow to provide shuttle service between Kingston and the Ashokan Rail Trail on the Ashokan Reservoir. The combination of the train and the trail will create a truly world-class regional tourist attraction that can result in even more benefits for Ulster County.

The CMRR will be scheduling 300 trains this year, up from 228 in 2019.  The CMRR has been working with NYSDOT and Ulster County to install new gates and flashers at the busy Route 209 crossing in the Town of Ulster and Washington Avenue in Kingston which have now been fully funded by over $1,000,000 from the state and federal government.  The CMRR also plans to bring into service a sixth coach in Kingston adding more passenger capacity for Polar Express and other rides.

In Phoenicia, the CMRR has had numerous requests to use its historic engine and coaches for a variety of period movie shoots.  With Rail Explorers and the Empire State Railway Museum on board, the CMRR has been working with the County to allow this to happen in 2020. Generally when a movie shoot is on location at the railroad, it will be in the area for two weeks and expends large sums in the local economy. We look forward to working with the County to bring more film shoots to the Phoenicia area with our vintage train in 2020.

The CMRR continues to work with Ulster County to find and fund a permanent location to store, renovate and maintain its fleet of passenger equipment to replace its former secure facility near Cornell Street in Kingston.

The CMRR looks forward to working with Ulster County to construct the infrastructure for a world-class tourist railroad for Ulster County and to promote the best possible combination of rail and trail on the Ulster and Delaware Railroad Corridor. This will bring the highest possible economic benefits to the residents and businesses of Ulster County, including more than doubling the payroll of the railroad and creating even more jobs.

As Ulster County’s only tourist railroad the CMRR looks forward to another successful year providing the public with fun and exciting train rides. All Aboard! More information on the CMRR and all of its current activities is available at www.catskillmountainrailroad.com. 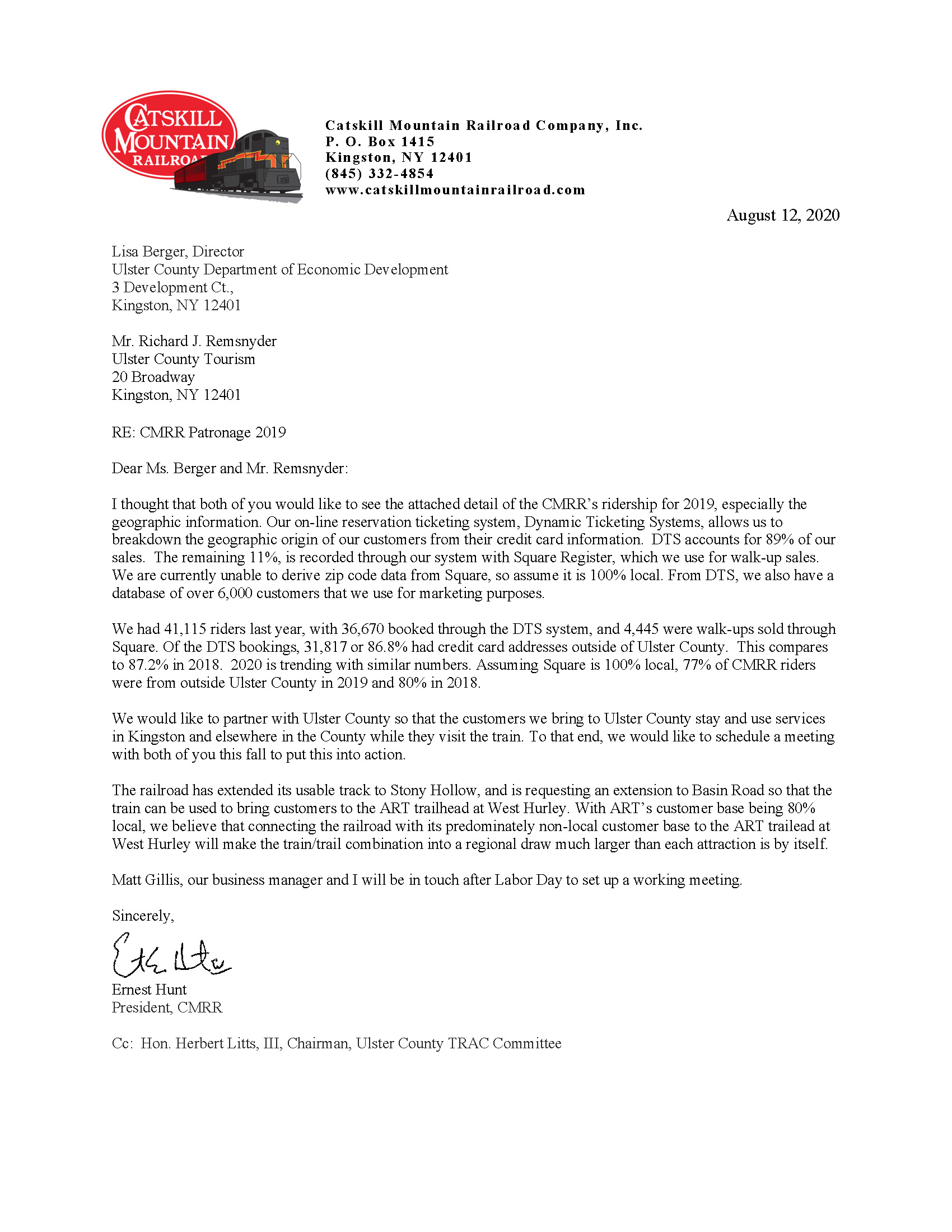