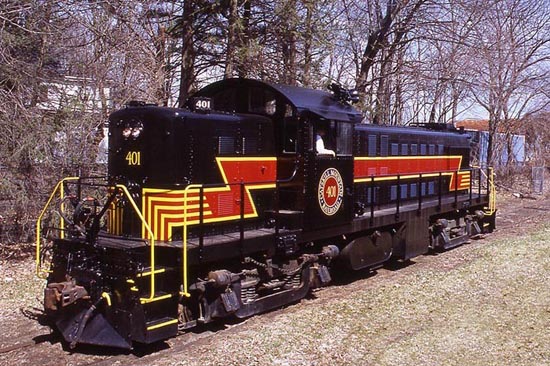 Catskill Mountain Railroad No. 401 came to us in June 1988, purchased from the Green Mountain Railway in Vermont. The locomotive was built in March 1950 by American Locomotive Company for the Illinois Terminal Railroad as their 756 (later renumbered 1056). The unit was sold to Gulf, Mobile & Ohio and became their 1052, and later folded into the Illinois Central Gulf in 1972 under the same number and paint. It was acquired by Green Mountain in July 1976, and entered service in December 1976. No. 401 hauled freight and passengers in Vermont until it was sold to CMRR in 1988.

Our connection to Conrail was still in place at the time, so the locomotive traveled on its own wheels all the way from Bellows Falls, Vt., to Kingston, N.Y. Conrail delivered the locomotive to Kingston in June 1988. The unit was immediately put to work as the railroad had a regular freight customer in the Kingston area.

After a few years of concentrating on expanding operations on the Phoenicia end, volunteers returned to Kingston in 2006 to help reopen the line through the city. Once again, 401 was called to duty to power work trains as volunteers inched closer and closer to opening the tracks through Kingston. In 2007, the decision was made to repaint the locomotive, which was still wearing the green paint applied in Vermont more than 20 years earlier. A version of New York Central’s famous “lightning stripes” was chosen, substituting CMRR’s colors for NYC’s two-tone gray.

The 401 is fully operational, and since 2008 has been pulling passengers as well as work trains through the historic city of Kingston on our seasonal train rides. 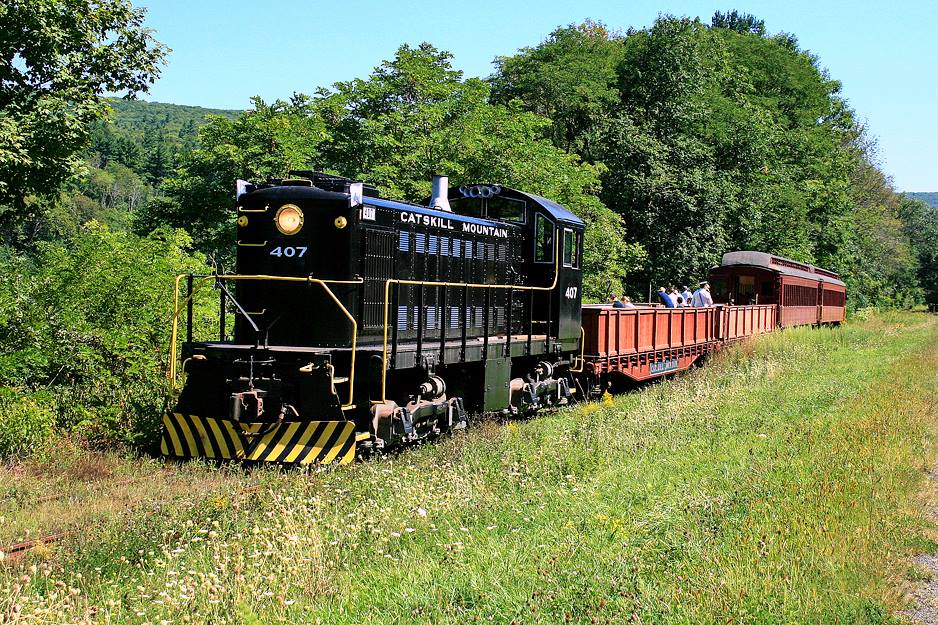 Catskill Mountain Railroad 407 is a locomotive with a long history of serving railroads in New York State. Built by the American Locomotive Company in Schenectady, N.Y., for the Long Island Rail Road in 1946. Designated a model S-1 by Alco, the locomotive is capable of generating 660 hp, and weighs 199,000 lbs. In 1966, the Metropolitan Transportation Authority purchased and assumed control of the Long Island Rail Road, and the 407 continued to serve its new owners faithfully.

On April 6, 1977, locomotive 407 was transferred to another MTA property, the Staten Island Railway. Clifton Shops in St. George became 407’s new home, relegated to work train and rescue duty. By the turn of the century, the MTA was looking to replace its older diesels with more current technology. New locomotives arrived in 2009 to replace 407 (and its sister unit 821). The Alcos were considered surplus and sold to an equipment broker.

Around the same time, the Catskill Mountain Railroad was shopping around for a new locomotive to handle the heavier trains on the Phoenicia end of the line. With more and more people visiting the railroad each year, CMRR’s two existing smaller engines were struggling to keep up with the demand. After months of careful negotiation and fundraising, an agreement was in place for the acquisition of locomotive 407 in 2010.

Because both CMRR and SIR are currently isolated from the national rail network, 407 would have to be partially disassembled and trucked north. This proceess was expertly attended to by a crew led by American Railway Technologies and also CMRR volunteers led by Earl Pardini. The dismantling took place on April 28 and 29. Handrails, air reservoirs, steps and a coupler were removed from the locomotive. Traction motor cables, sand pipes and air brakes were disconnected from the trucks. On April 30, the locomotive was loaded by Staten Island Towing and prepared for shipment. The wheel assemblies would go in one load, and the rest of the locomotive would follow after.

After a few minor delays, 407 finally arrived in Mount Tremper on May 6, 2010. The locomotive was reassembled the next day with the help of Costanzi Crane & Rigging Co. and many CMRR volunteers. The locomotive was started up, and 407 made its maiden voyage over the CMRR on May 7, 2010. No. 407 is the primary power for our Esopus Scenic Trains operating out of Mt. Tremper, and in 2015 was painted and lettered in a style similar to the old New York Central Railroad.

The Catskill Mountain Railroad owns five P72 coaches purchased by the Long Island Railroad in 1955 and 1956 from the Pullman Standard company. They were originally equipped with steam heat but later converted to electric.  These cars were retired from service from the LIRR in 1999. Each car has an independent diesel generator for heat, lighting, and electric. The CMRR has installed HEP connections between all coaches so the coaches can be operated with head end power as well as individual generators

All are in service except 2918 which is under renovation.  Coaches 2918 and 2962 were purchased from the Walkersville Southern Railroad; 2940 from the New York and Atlantic Railroad, and 2911 and 2949 from private owners. 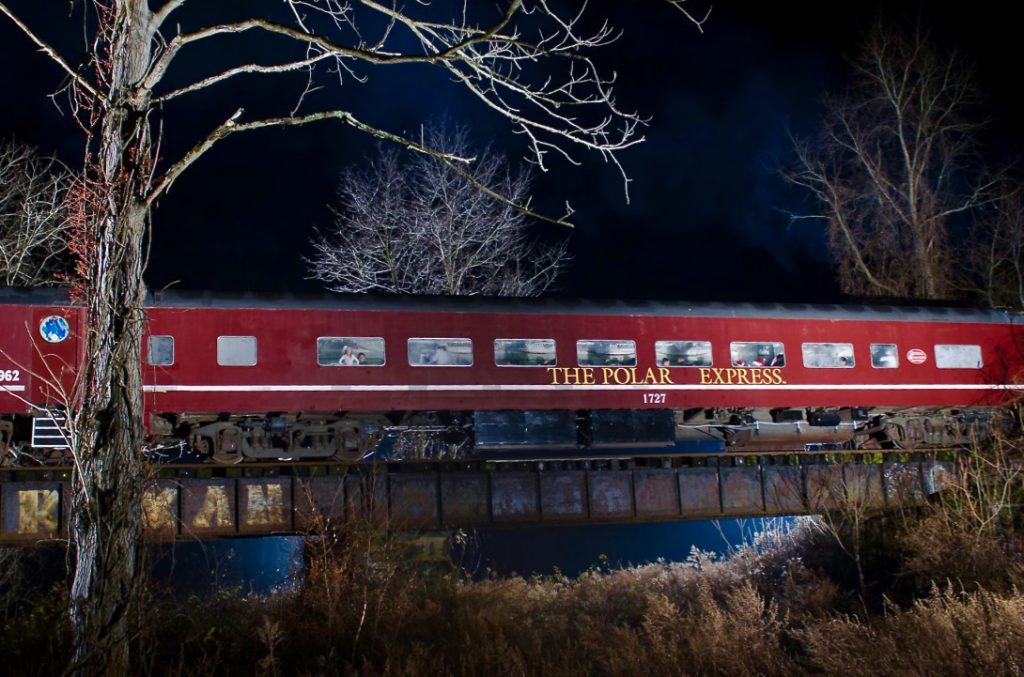 The CMRR also owns a former Norfolk & Western PM coach which was built in October 1941 by the Pullman Company. It was used by the Norfolk & Western on their famous Pohwattan Arrow and Pocahontas trains.  It was the first coach in the famous wreck of N&W 611 on January 23, 1956 in Cedar, West Virginia.  N&W 611 has been restored to service and is actively used in passenger excursion service.

The Norfolk & Western sold coach 1727 to the Ontario Northern Railway in Canada in 1971, where it was refurbished for passenger service on the Polar Bear Express and renumbered 832. In 2004 it was retired and sold to a private collector who stored it in North Creek, New York until the coach was purchased in 2015 by the Catskill Mountain Railroad. It was brought by truck from North Creek to Kingston and renumbered CMRR 1727. 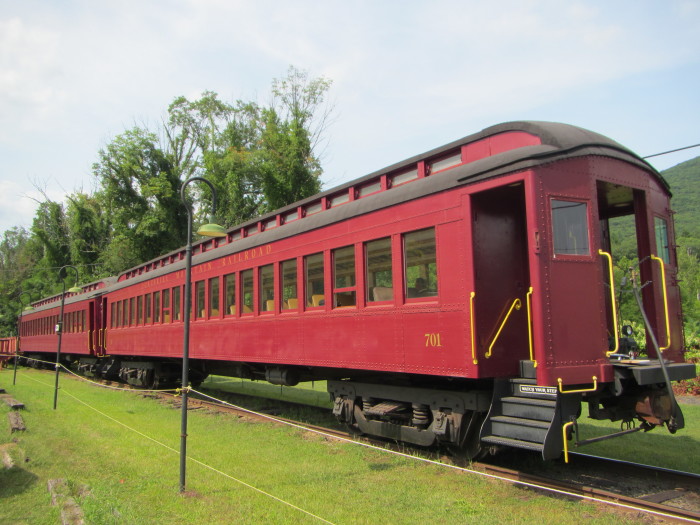 The Delaware, Lackawanna & Western Railroad once operated an extensive commuter service from Hoboken to the suburbs of northern New Jersey. A pioneer in electrification, swift electric trains were introduced in the 1930s. A combination of motorized and non-motorized trailers were used, some built as early as 1925.